Resurrecting PCs One At A Time

Note: Click on any image for a larger view of that particular image.


...Follow these Rules and be worry free. Over time you WILL notice a significant drop in problems related to virus's, worms or other malicious bugs.

When it comes to patching vulnerabilities found, Microsoft has been notorious for not releasing patches in a timely fashion. According to the Washington Post, Internet Explorer was known to have exploit code for unpatched critical flaws for 284 days of 2006 [1]. The article goes on to compare this with 9 days for Mozilla Firefox.

If you are still not convinced that Internet Explorer is the worst Piece -Of -S##t, read through this article:
http://en.wikipedia.org/wiki/Criticism_of_Internet_Explorer

That is why, Golden Rule #1 For safer internet browsing is,For safer browsing, do not use Internet Explorer .

When I say No Toolbars, I am talking about ALL Toolbars. I don't care if it is from Microsoft, Google, Symantec or whoever. So far I have never seen a toolbar that was absolutely necessary. And under the surface, all they do is provide another gateway into your pc to allow bad things into your pc.

Think of it this way, imagine you are in a house and outside of the house are tons of honeybees. Now lets say you were trying to not allow any honeybees into the house. It wouldn't make sense to go around and open all of the windows of the house, would it?

For each toolbar added, you are opening a window. 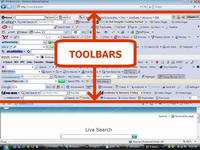 No matter how useful the toolbar is, it does not compare to the massive security risk you are taking by installing and using that toolbar.

That is why, Golden Rule #2 For safer internet browsing is, No Toolbars! ! !

These types of programs are filled with all kinds of bad things. In my experience, I would say 1 out of every 10 files contains a virus/worm/spyware. Yes, I know, it is nice to be able to download that new song you heard on the radio or download the latest software, all for free. But realize that by doing this, you are playing with a loaded gun, when it comes to the security of your computer.

For me, being in the PC repair field, I see this all the time. But what really gets to me, is the fact that people realize that using File Sharing Programs are a risk and are breeding grounds for virus/worms, but then when their PC gets a horrible virus or worm on it, they are confused by how it could have gotten on their system.

It doesn’t matter how great your firewall is or how many spyware scans you do a day, using these types of file sharing programs puts your pc “in the line of fire” for virus and worms.

For safer browsing, do not use or install file sharing programs. Period.